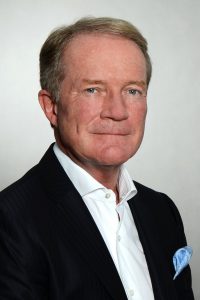 Robert Hübner has been the Executive Manager of the RH Unternehmensgruppe since 1995, the third generation of his family in this position. Under his management, the focus of the commercial business has shifted to the project development of office buildings, hotels, retail centers and residential and commercial buildings in Germany and Austria, as well as asset and shareholder management.

Robert Hübner graduated in 1984 with a degree in Business Administration from the Free University of Berlin. That same year, Robert Hübner founded together with Peter Pistor the company Droste AG Berlin, which specialized in the restoration of old buildings in Berlin. When Mr. Pistor left the company three years later, Mr. Hübner took over several existing properties from Droste AG into the portfolio of his new company Hübner & Weingärtner Vermögensverwaltungs GbR, which he founded together with Manfred Weingärtner in 1988. In addition to the renovation of magnificent old buildings, the company also began to focus on the planning and construction of commercial and hotel properties.

After assuming executive management, Robert Hübner centralized all the family’s own individual companies under the umbrella brand of the RH Unternehmensgruppe.

Corporate social responsibility and commitment have always been fundamentally important for the Hübner family and they take great pleasure in actively practicing their convictions. In particular, Robert Hübner has a special place in his heart for kultural institutions and projects for children and people in need of care. His support includes financial assistance as well as active volunteer work.